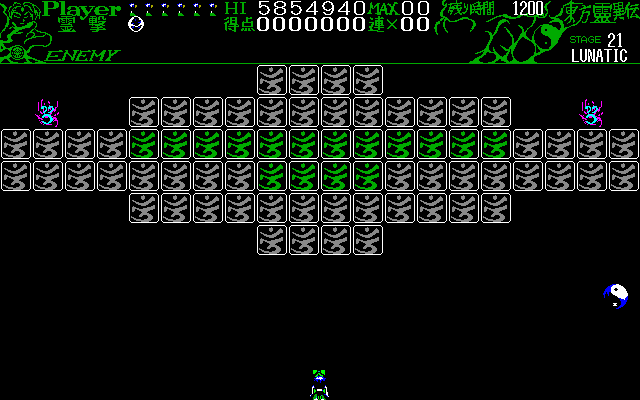 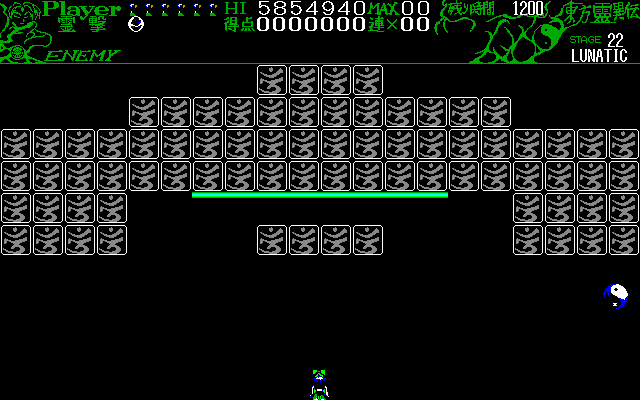 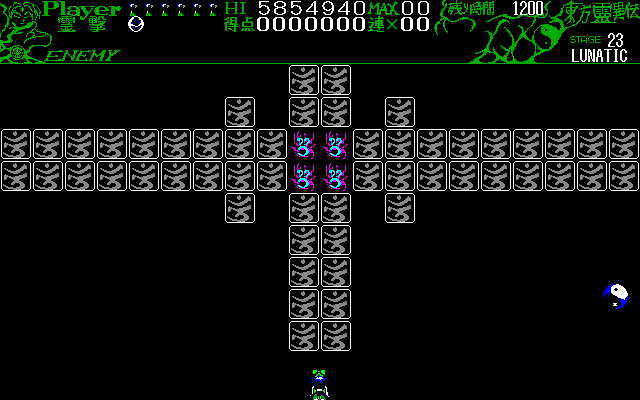 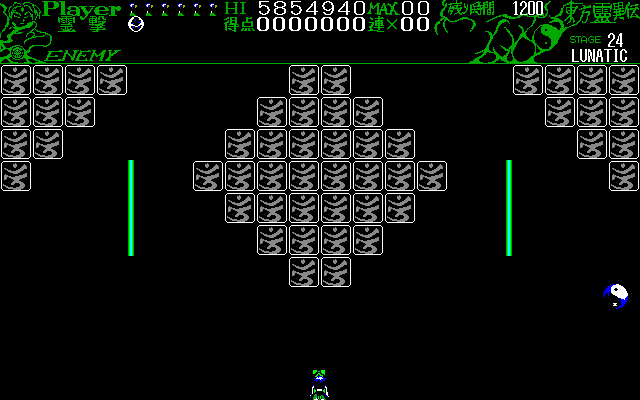 Well, make that three days. Trying to figure out all the details behind the sprite flickering was absolutely dreadful…
It started out easy enough, though. Unsurprisingly, TH01 had a quite limited pellet system compared to TH04 and TH05:

As expected from TH01, the code comes with its fair share of smaller, insignificant ZUN bugs and oversights. As you would also expect though, the sprite flickering points to the biggest and most consequential flaw in all of this.

Apparently, it started with ZUN getting the impression that it's only possible to use the PC-98 EGC for fast blitting of all 4 bitplanes in one CPU instruction if you blit 16 horizontal pixels (= 2 bytes) at a time. Consequently, he only wrote one function for EGC-accelerated sprite unblitting, which can only operate on a "grid" of 16×1 tiles in VRAM. But wait, pellets are not only just 8×8, but can also be placed at any unaligned X position…

… yet the game still insists on using this 16-dot-aligned function to unblit pellets, forcing itself into using a super sloppy 16×8 rectangle for the job. 🤦 ZUN then tried to mitigate the resulting flickering in two hilarious ways that just make it worse:

Yup, that's it, we've found the most stupid piece of code in this game, period. It'll be hard to top this.

I'm confident that it's possible to turn TH01 into a well-written, fluid PC-98 game, with no flickering, and no perceived lag, once it's position-independent. With some more in-depth knowledge and documentation on the EGC (remember, there's still 📝 this one TH03 push waiting to be funded), you might even be able to continue using that piece of blitter hardware. And no, you certainly won't need ASM micro-optimizations – just a bit of knowledge about which optimizations Turbo C++ does on its own, and what you'd have to improve in your own code. It'd be very hard to write worse code than what you find in TH01 itself.

(Godbolt for Turbo C++ 4.0J when? Seriously though, that would 📝 also be a great project for outside contributors!)

Oh well. In contrast to TH04 and TH05, where 4 pushes only covered all the involved data types, they were enough to completely cover all of the pellet code in TH01. Everything's already decompiled, and we never have to look at it again. 😌 And with that, TH01 has also gone from by far the least RE'd to the most RE'd game within ReC98, in just half a year! 🎉
Still, that was enough TH01 game logic for a while.

Next up: Making up for the delay with some more relaxing and easy pieces of TH01 code, that hopefully make just a bit more sense than all this garbage. More image formats, mainly.

Back to TH01, and its high score menu… oh, wait, that one will eventually involve keyboard input. And thanks to the generous TH01 funding situation, there's really no reason not to cover that right now. After all, TH01 is the last game where input still hadn't been RE'd.
But first, let's also cover that one unused blitting function, together with REIIDEN.CFG loading and saving, which are in front of the input function in OP.EXE… (By now, we all know about the hidden start bomb configuration, right?)

Unsurprisingly, the earliest game also implements input in the messiest way, with a different function for each of the three executables. "Because they all react differently to keyboard inputs

", apparently? OP.EXE even has two functions for it, one for the START / CONTINUE / OPTION / QUIT main menu, and one for both Option and Music Test menus, both of which directly perform the ring arithmetic on the menu cursor variable. A consistent separation of keyboard polling from input processing apparently wasn't all too obvious of a thought, since it's only truly done from TH02 on.

This lack of proper architecture becomes actually hilarious once you notice that it did in fact facilitate a recursion bug!

In case you've been living under a rock for the past 8 years, TH01 shipped with debugging features, which you can enter by running the game via game d from the DOS prompt. These features include a memory info screen, shown when pressing PgUp, implemented as one blocking function (test_mem()) called directly in response to the pressed key inside the polling function. test_mem() only returns once that screen is left by pressing PgDown. And in order to poll input… it directly calls back into the same polling function that called it in the first place, after a 3-frame delay.

Which means that this screen is actually re-entered for every 3 frames that the PgUp key is being held. And yes, you can, of course, also crash the system via a stack overflow this way by holding down PgUp for a few seconds, if that's your thing.
Edit (2020-09-17): Here's a video from spaztron64, showing off this exact stack overflow crash while running under the VEM486 memory manager, which displays additional information about these sorts of crashes:

What makes this even funnier is that the code actually tracks the last state of every polled key, to prevent exactly that sort of bug. But the copy-pasted assignment of the last input state is only done after test_mem() already returned, making it effectively pointless for PgUp. It does work as intended for PgDown… and that's why you have to actually press and release this key once for every call to test_mem() in order to actually get back into the game. Even though a single call to PgDown will already show the game screen again.

In maybe more relevant news though, this function also came with what can be considered the first piece of actual gameplay logic! Bombing via double-tapping the Z and X keys is also handled here, and now we know that both keys simply have to be tapped twice within a window of 20 frames. They are tracked independently from each other, so you don't necessarily have to press them simultaneously.
In debug mode, the bomb count tracks precisely this window of time. That's why it only resets back to 0 when pressing Z or X if it's ≥20.

Sure, TH01's code is expectedly terrible and messy. But compared to the micro-optimizations of TH04 and TH05, it's an absolute joy to work on, and opening all these ZUN bug loot boxes is just the icing on the cake. Looking forward to more of the high score menu in the next pushes!