It's vacation time! Which, for ReC98, means "relaxing by looking at something boring and uninteresting that we'll ultimately have to cover anyway"… like the TH01 HUD.

📝 As noted earlier, all the score, card combo, stage, and time numbers are drawn into VRAM. Which turns TH01's HUD rendering from the trivial, gaiji-assisted text RAM writes we see in later games to something that, once again, requires blitting and unblitting steps. For some reason though, everything on there is blitted to both VRAM pages? And that's why the HUD chose to allocate a bunch of .PTN sprite slots to store the background behind all "animated" elements at the beginning of a 4-stage scene or boss battle… separately for every affected 16×16 area. (Looking forward to the completely unnecessary code in the Sariel fight that updates these slots after the backgrounds were animated!) And without any separation into helper functions, we end up with the same blitting calls separately copy-pasted for every single HUD element. That's why something as seemingly trivial as this isn't even done after 2 pushes, as we're still missing the stage timer.

Thankfully, the .PTN function signatures come with none of ZUN's little inconsistencies, so I was able to mostly reduce this copy-pasta to a bunch of small inline functions and macros. Those interfaces still remain a bit annoying, though. As a 32×32 format, .PTN merely supports 16×16 sprites with a separate bunch of functions that take an additional quarter parameter from 0 to 3, to select one of the 4 16×16 quarters in a such a sprite…

For life and bomb counts, there was no way around VRAM though, since ZUN wanted to use more than a single color for those. This is where we find at least somewhat of a mildly interesting quirk in all of this: Any life counts greater than the intended 6 will wrap into new rows, with the bombs in the second row overlapping those excess lives. With the way the rest of the HUD rendering works, that wrapping code code had to be explicitly written… which means that ZUN did in fact accomodate (his own?) cheating there. 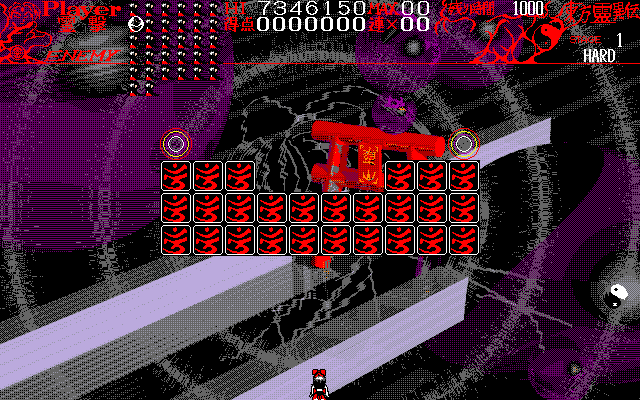 Now, I promised image formats, and in the middle of this copy-pasta, we did get one… sort of. MASK.GRF, the red HUD background, is entirely handled with two small bespoke functions… and that's all the code we have for this format. Basically, it's a variation on the 📝 .GRZ format we've seen earlier. It uses the exact same RLE algorithm, but only has a single byte stream for both RLE commands and pixel data… as you would expect from an RLE format.

, so no unused beta data for us there. The only thing we could derive from 4 identical bitplanes would be that the background was originally meant to be drawn using color #15, rather than the red seen in the final game. Color #15 is a stage-specific background color that would have made the HUD blend in quite nicely – in the YuugenMagan fight, it's the changing color of the 邪 in the background, for example. But really, with no generic implementation of this format, that's all just speculation.

Oh, and in case you were looking for a rip of that image:

So yeah, more of the usual TH01 code, with the usual small quirks, but nothing all too horrible – as expected. Next up: The image formats that didn't make it into this push.