Did you know that moving on top of a boss sprite doesn't kill the player in TH04, only in TH05?

That's the first of only three interesting discoveries in these 3 pushes, all of which concern TH04. But yeah, 3 for something as seemingly simple as these shared boss functions… that's still not quite the speed-up I had hoped for. While most of this can be blamed, again, on TH04 and all of its hardcoded complexities, there still was a lot of work to be done on the maintenance front as well. These functions reference a bunch of code I RE'd years ago and that still had to be brought up to current standards, with the dependencies reaching from 📝 boss explosions over 📝 text RAM overlay functionality up to in-game dialog loading.

The latter provides a good opportunity to talk a bit about x86 memory segmentation. Many aspiring PC-98 developers these days are very scared of it, with some even going as far as to rather mess with Protected Mode and DOS extenders just so that they don't have to deal with it. I wonder where that fear comes from… Could it be because every modern programming language I know of assumes memory to be flat, and lacks any standard language-level features to even express something like segments and offsets? That's why compilers have a hard time targeting 16-bit x86 these days: Doing anything interesting on the architecture requires giving the programmer full control over segmentation, which always comes down to adding the typical non-standard language extensions of compilers from back in the day. And as soon as DOS stopped being used, these extensions no longer made sense and were subsequently removed from newer tools. A good example for this can be found in an old version of the NASM manual: The project started as an attempt to make x86 assemblers simple again by throwing out most of the segmentation features from MASM-style assemblers, which made complete sense in 1996 when 16-bit DOS and Windows were already on their way out. But there was a point to all those features, and that's why ReC98 still has to use the supposedly inferior TASM.

Not that this fear of segmentation is completely unfounded: All the segmentation-related keywords, directives, and #pragmas provided by Borland C++ and TASM absolutely can be the cause of many weird runtime bugs. Even if the compiler or linker catches them, you are often left with confusing error messages that aged just as poorly as memory segmentation itself.
However, embracing the concept does provide quite the opportunity for optimizations. While it definitely was a very crazy idea, there is a small bit of brilliance to be gained from making proper use of all these segmentation features. Case in point: The buffer for the in-game dialog scripts in TH04 and TH05.

If dialog_p was a huge pointer, any pointer arithmetic would have also adjusted the segment part, requiring a second pointer to store the base address for the hmem_free call. Doing that will also be necessary for any port to a flat memory model. Depending on how you look at it, this compression of two logical pointers into a single variable is either quite nice, or really, really dumb in its reliance on the precise memory model of one single architecture.

Why look at dialog loading though, wasn't this supposed to be all about shared boss functions? Well, TH04 unnecessarily puts certain stage-specific code into the boss defeat function, such as loading the alternate Stage 5 Yuuka defeat dialog before a Bad Ending, or initializing Gengetsu after Mugetsu's defeat in the Extra Stage.
That's TH04's second core function with an explicit conditional branch for Gengetsu, after the 📝 dialog exit code we found last year during EMS research. And I've heard people say that Shinki was the most hardcoded fight in PC-98 Touhou… Really, Shinki is a perfectly regular boss, who makes proper use of all internal mechanics in the way they were intended, and doesn't blast holes into the architecture of the game. Even within TH05, it's Mai and Yuki who rely on hacks and duplicated code, not Shinki.

The worst part about this though? How the function distinguishes Mugetsu from Gengetsu. Once again, it uses its own global variable to track whether it is called the first or the second time within TH04's Extra Stage, unrelated to the same variable used in the dialog exit function. But this time, it's not just any newly created, single-use variable, oh no. In a misguided attempt to micro-optimize away a few bytes of conventional memory, TH04 reserves 16 bytes of "generic boss state", which can (and are) freely used for anything a boss doesn't want to store in a more dedicated variable.
It might have been worth it if the bosses actually used most of these 16 bytes, but the majority just use (the same) two, with only Stage 4 Reimu using a whopping seven different ones. To reverse-engineer the various uses of these variables, I pretty much had to map out which of the undecompiled danmaku-pattern functions corresponds to which boss fight. In the end, I assigned 29 different variable names for each of the semantically different use cases, which made up another full push on its own.

Now, 16 bytes of wildly shared state, isn't that the perfect recipe for bugs? At least during this cursory look, I haven't found any obvious ones yet. If they do exist, it's more likely that they involve reused state from earlier bosses – just how the Shinki death glitch in TH05 is caused by reusing cheeto data from way back in Stage 4 – and hence require much more boss-specific progress.
And yes, it might have been way too early to look into all these tiny details of specific boss scripts… but then, this happened: 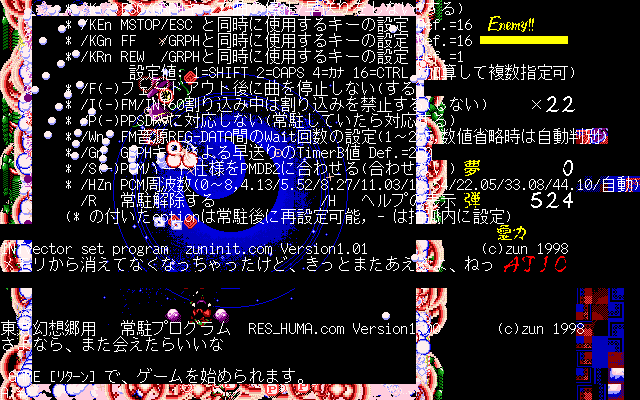 Looks similar to another screenshot of a crash in the same fight that was reported in December, doesn't it? I was too much in a hurry to figure it out exactly, but notice how both crashes happen right as the last of Marisa's four bits is destroyed. KirbyComment has suspected this to be the cause for a while, and now I can pretty much confirm it to be an unguarded division by the number of on-screen bits in Marisa-specific pattern code. But what's the cause for Kurumi then?

As for fixing it, I can go for either a fast or a slow option:

OK, now that that's out of the way, time to finish the boss defeat function… but not without stumbling over the third of TH04's quirks, relating to the Clear Bonus for the main game or the Extra Stage:

And after another few collision-related functions, we're now truly, finally ready to decompile bosses in both TH04 and TH05! Just as the anything funds were running out…

The remaining ¼ of the third push then went to Shinki's 32×32 ball bullets, rounding out this delivery with a small self-contained piece of the first TH05 boss we're probably going to look at.

Next up, though: I'm not sure, actually. Both Shinki and Elis seem just a little bit larger than the 2¼ or 4 pushes purchased so far, respectively. Now that there's a bunch of room left in the cap again, I'll just let the next contribution decide – with a preference for Shinki in case of a tie. And if it will take longer than usual for the store to sell out again this time (heh), there's still the 📝 PC-98 text RAM JIS trail word rendering research waiting to be documented.