EMS memory! The infamous stopgap measure between the 640 KiB ("ought to be enough for everyone") of conventional memory offered by DOS from the very beginning, and the later XMS standard for accessing all the rest of memory up to 4 GiB in the x86 Protected Mode. With an optionally active EMS driver, TH04 and TH05 will make use of EMS memory to preload a bunch of situational .CDG images at the beginning of MAIN.EXE:

Once these images are needed, they can then be copied into conventional memory and accessed as usual.

Uh… wait, copied? It certainly would have been possible to map EMS memory to a regular 16-bit Real Mode segment for direct access, bank-switching out rarely used system or peripheral memory in exchange for the EMS data. However, master.lib doesn't expose this functionality, and only provides functions for copying data from EMS to regular memory and vice versa.
But even that still makes EMS an excellent fit for the large image files it's used for, as it's possible to directly copy their pixel data from EMS to VRAM. (Yes, I tried!) Well… would, because ZUN doesn't do that either, and always naively copies the images to newly allocated conventional memory first. In essence, this dumbs down EMS into just another layer of the memory hierarchy, inserted between conventional memory and disk: Not quite as slow as disk, but still requiring that memcpy() to retrieve the data. Most importantly though: Using EMS in this way does not increase the total amount of memory simultaneously accessible to the game. After all, some other data will have to be freed from conventional memory to make room for the newly loaded data.

The most idiomatic way to define the game-specific layout of the EMS area would be either a struct or an enum. Unfortunately, the total size of all these images exceeds the range of a 16-bit value, and Turbo C++ 4.0J supports neither 32-bit enums (which are silently degraded to 16-bit) nor 32-bit structs (which simply don't compile). That still leaves raw compile-time constants though, you only have to manually define the offset to each image in terms of the size of its predecessor. But instead of doing that, ZUN just placed each image at a nice round decimal offset, each slightly larger than the actual memory required by the previous image, just to make sure that everything fits.

This results not only in quite a bit of unnecessary padding, but also in technically the single biggest amount of "wasted" memory in PC-98 Touhou: Out of the 180,000 (TH04) and 320,000 (TH05) EMS bytes requested, the game only uses 135,552 (TH04) and 175,904 (TH05) bytes. But hey, it's EMS, so who cares, right? Out of all the opportunities to take shortcuts during development, this is among the most acceptable ones. Any actual PC-98 model that could run these two games comes with plenty of memory for this to not turn into an actual issue.

On to the EMS-using functions themselves, which are the definition of "cross-cutting concerns". Most of these have a fallback path for the non-EMS case, and keep the loaded .CDG images in memory if they are immediately needed. Which totally makes sense, but also makes it difficult to find names that reflect all the global state changed by these functions. Every one of these is also just called from a single place, so inlining them would have saved me a lot of naming and documentation trouble there.
The TH04 version of the EMS allocation code was actually displayed on ZUN's monitor in the 2010 MAG・ネット documentary; WindowsTiger already transcribed the low-quality video image in 2019. By 2015 ReC98 standards, I would have just run with that, but the current project goal is to write better code than ZUN, so I didn't. 😛 We sure ain't going to use magic numbers for EMS offsets.

The dialog init and exit code then is completely different in both games, yet equally cross-cutting. TH05 goes even further in saving conventional memory, loading each individual player or boss portrait into a single .CDG slot immediately before blitting it to VRAM and freeing the pixel data again. People who play TH05 without an active EMS driver are surely going to enjoy the hard drive access lag between each portrait change…

TH04, on the other hand, also abuses the dialog exit function to preload the Mugetsu defeat / Gengetsu entrance and Gengetsu defeat portraits, using a static variable to track how often the function has been called during the Extra Stage… who needs function parameters anyway, right?

This is also the function in which TH04 infamously crashes after the Stage 5 pre-boss dialog when playing with Reimu and without any active EMS driver. That crash is what motivated this look into the games' EMS usage… but the code looks perfectly fine? Oh well, guess the crash is not related to EMS then. Next u–

OK, of course I can't leave it like that. Everyone is expecting a fix now, and I still got half of a push left over after decompiling the regular EMS code. Also, I've now RE'd every function that could possibly be involved in the crash, and this is very likely to be the last time I'll be looking at them.

Turns out that the bug has little to do with EMS, and everything to do with ZUN limiting the amount of conventional RAM that TH04's MAIN.EXE is allowed to use, and then slightly miscalculating this upper limit. Playing Stage 5 with Reimu is the most asset-intensive configuration in this game, due to the combination of

Remove any single one of the above points, and this crash would have never occurred. But with all of them combined, the total amount of memory consumed by TH04's MAIN.EXE just barely exceeds ZUN's limit of 320,000 bytes, by no more than 3,840 bytes, the size of the star image.

But wait: As we established earlier, EMS does nothing to reduce the amount of conventional memory used by the game. In fact, if you disabled TH04's EMS handling, you'd still get this crash even if you are running an EMS driver and loaded DOS into the High Memory Area to free up as much conventional RAM as possible. How can EMS then prevent this crash in the first place?

The answer: It's only because ZUN's usage of EMS bypasses the need to load the cached images back out of the XOR-encrypted 東方幻想.郷 packfile. Leaving aside the general stupidity of any game data file encryption*, master.lib's decryption implementation is also quite wasteful: It uses a separate buffer that receives fixed-size chunks of the file, before decrypting every individual byte and copying it to its intended destination buffer. That really resembles the typical slowness of a C fread() implementation more than it does the highly optimized ASM code that master.lib purports to be… And how large is this well-hidden decryption buffer? 4 KiB.

So, looking back at the game, here is what happens once the Stage 5 pre-battle dialog ends: 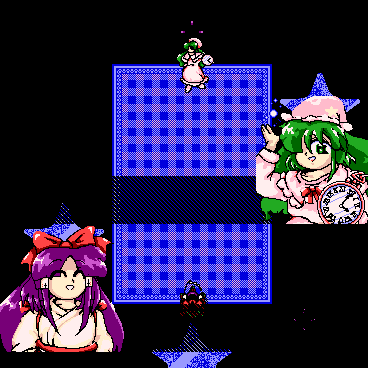 The final frame rendered by a crashing TH04.

The 4 KiB encryption buffer would only be freed by the corresponding file_close() call, which of course never happens because the game crashes before it gets there. At one point, I really did suspect the cause to be some kind of memory leak or fragmentation inside master.lib, which would have been quite delightful to fix.
Instead, the most straightforward fix here is to bump up that memory limit by at least 4 KiB. Certainly easier than squeezing in a cdg_free() call for the star image before the pre-boss dialog without breaking position dependence.

Or, even better, let's nuke all these memory limits from orbit because they make little sense to begin with, and fix every other potential out-of-memory crash that modders would encounter when adding enough data to any of the 4 games that impose such limits on themselves. Unless you want to launch other binaries (which need to do their own memory allocations) after launching the game, there's really no reason to restrict the amount of memory available to a DOS process. Heck, whenever DOS creates a new one, it assigns all remaining free memory by default anyway.
Removing the memory limits also removes one of ZUN's few error checks, which end up quitting the game if there isn't at least a given maximum amount of conventional RAM available. While it might be tempting to reserve enough memory at the beginning of execution and then never check any allocation for a potential failure, that's exactly where something like TH04's crash comes from.
This game is also still running on DOS, where such an initial allocation failure is very unlikely to happen – no one fills close to half of conventional RAM with TSRs and then tries running one of these games. It might have been useful to detect systems with less than 640 KiB of actual, physical RAM, but none of the PC-98 models with that little amount of memory are fast enough to run these games to begin with. How ironic… a place where ZUN actually added an error check, and then it's mostly pointless.

Here's an archive that contains both fix variants, just in case. These were compiled from the th04_noems_crash_fix and mem_assign_all branches, and contain as little code changes as possible: 2021-11-29-Memory-limit-fixes.zip

So yeah, quite a complex bug, leaving no time for the TH03 scorefile format research after all. Next up: Raising prices.