The "bad" news first: Expanding to Stripe in order to support Google Pay requires bureaucratic effort that is not quite justified yet, and would only be worth it after the next price increase.

Visualizing technical debt has definitely been overdue for a while though. With 1 of these 2 pushes being focused on this topic, it makes sense to summarize once again what "technical debt" means in the context of ReC98, as this info was previously kind of scattered over multiple blog posts. Mainly, it encompasses

Technically (ha), it would also include all of master.lib, which has always been compiled into the binaries in this way, and which will require quite a bit of dedicated effort to be moved out into a properly linkable library, once it's feasible. But this code has never been part of any progress metric – in fact, 0% RE is defined as the total number of x86 instructions in the binary minus any library code. There is also no relation between instruction numbers and the time it will take to finalize master.lib code, let alone a precedent of how much it would cost.

If we now want to express technical debt as a percentage, it's clear where the 100% point would be: when all RE'd code is also compiled in from a translation unit outside the big .ASM one. But where would 0% be? Logically, it would be the point where no reverse-engineered code has ever been moved out of the big translation units yet, and nothing has ever been decompiled. With these boundary points, this is what we get:

Not too bad! So it's 6.22% of total RE that we will have to revisit at some point, concentrated mostly around TH04 and TH05 where it resulted from a focus on position independence. The prices also give an accurate impression of how much more work would be required there.

But is that really the best visualization? After all, it requires an understanding of our definition of technical debt, so it's maybe not the most useful measurement to have on a front page. But how about subtracting those 6.22% from the number shown on the RE% bars? Then, we get this: 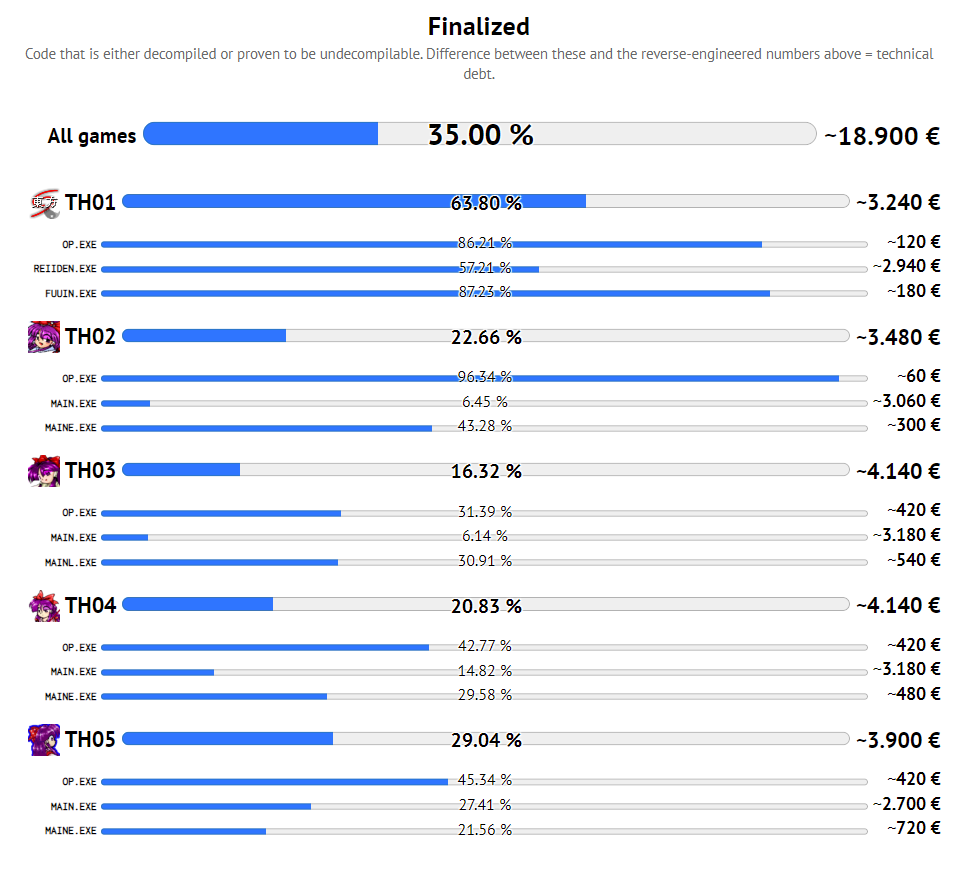 Which is where we get to the good news: Twitter surprisingly helped me out in choosing one visualization over the other, voting 7:2 in favor of the Finalized version. While this one requires you to manually calculate € finalized - € RE'd to obtain the raw financial cost of technical debt, it clearly shows, for the first time, how far away we are from the main goal of fully decompiling all 5 games… at least to the extent it's possible.

Now that the parser is looking at these recursively included .ASM files for the first time, it needed a small number of improvements to correctly handle the more advanced directives used there, which no automatic disassembler would ever emit. Turns out I've been counting some directives as instructions that never should have been, which is where the additional 0.02% total RE came from.

One more overcounting issue remains though. Some of the RE'd assembly slices included by multiple games contain different if branches for each game, like this:

Currently, the parser simply ignores if, else, and endif, leading to the combined code of all branches being counted for every game that includes such a file. This also affects the calculated speed, and is the reason why finalization seems to be slightly faster than reverse-engineering, at currently 471 instructions per push compared to 463. However, it's not that bad of a signal to send: Most of the not yet finalized code is shared between TH04 and TH05, so finalizing it will roughly be twice as fast as regular reverse-engineering to begin with. (Unless the code then turns out to be twice as complex than average code…

For completeness, finalization is now also shown as part of the per-commit metrics. Now it's clearly visible what I was doing in those very slow five months between P0131 and P0140, where the progress bar didn't move at all: Repaying 3.49% of previously accumulated technical debt across all games. 👌

As announced, I've also implemented a new caching system for this website, as the second main feature of these two pushes. By appending a hash string to the URLs of static resources, your browser should now both cache them forever and re-download them once they did change on the server. This avoids the unnecessary (and quite frankly, embarrassing) re-requests for all static resources that typically just return a 304 Not Modified response. As a result, the blog should now load a bit faster on repeated visits, especially on slower connections. That should allow me to deliberately not paginate it for another few years, without it getting all too slow – and should prepare us for the day when our first game reaches 100% and the server will get smashed.

However, I am open to changing the progress blog link in the navigation bar at the top to the list of tags, once people start complaining.

Apart frome some more invisible correctness and QoL improvements, I've also prepared some new funding goals, but I'll cover those once the store reopens, next year. Syntax highlighting for code snippets would have also been cool, but unfortunately didn't make it into those two pushes. It's still on the list though!

Next up: Back to RE with the TH03 score file format, and other code that surrounds it.