Back after taking way too long to get Touhou Patch Center's MediaWiki update feature complete… I'm still waiting for more translators to test and review the new translation interface before delivering and deploying it all, which will most likely lead to another break from ReC98 within the next few months. For now though, I'm happy to have mostly addressed the nagging responsibility I still had after willing that site into existence, and to be back working on ReC98. 🙂

As announced, the next few pushes will focus on TH04's and TH05's bullet spawning code, before I get to put all that accumulated TH01 money towards finishing all of konngara's code in TH01. For a full picture of what's happening with bullets, we'd really also like to have the bullet update function as readable C code though.
Clearing all bullets on the playfield will trigger a Bonus!! popup, displayed as 📝 gaiji in that proportional font. Unfortunately, TLINK refused to link the code as soon as I referenced the function for animating the popups at the top of the playfield? Which can only mean that we have to decompile that function first…

So, let's turn that piece of technical debt into a full push, and first decompile another random set of previously reverse-engineered TH04 and TH05 functions. Most of these are stored in a different place within the two MAIN.EXE binaries, and the tried-and-true method of matching segment names would therefore have introduced several unnecessary translation units. So I resorted to a segment splitting technique I should have started using way earlier: Simply creating new segments with names derived from their functions, at the exact positions they're needed. All the new segment start and end directives do bloat the ASM code somewhat, and certainly contributed to this push barely removing any actual lines of code. However, what we get in return is total freedom as far as decompilation order is concerned, 📝 which should be the case for any ReC project, really. And in the end, all these tiny code segments will cancel out anyway.
If only we could do the same with the data segment…

The popup function happened to be the final one I RE'd before my long break in the spring of 2019. Back then, I didn't even bother looking into that 64-frame delay between changing popups, and what that meant for the game.
Each of these popups stays on screen for 128 frames, during which, of course, another popup-worthy event might happen. Handling this cleanly without removing previous popups too early would involve some sort of event queue, whose size might even be meaningfully limited to the number of distinct events that can happen. But still, that'd be a data structure, and we're not gonna have that!

Instead, ZUN simply keeps two variables for the new and current popup ID. During an active popup, any change to that ID will only be committed once the current popup has been shown for at least 64 frames. And during that time, that new ID can be freely overwritten with a different one, which drops any previous, undisplayed event. But surely, there won't be more than two events happening within 63 frames, right?

The rest was fairly uneventful – no newly RE'd functions in this push, after all – until I reached the widely used helper function for applying the current vertical scrolling offset to a Y coordinate. Its combination of a function parameter, the pascal calling convention, and no stack frame was previously thought to be undecompilable… except that it isn't, and the decompilation didn't even require any new workarounds to be developed? Good thing that I already forgot how impossible it was to decompile the first function I looked at that fell into this category!
Oh well, this discovery wasn't too groundbreaking. Looking back at all the other functions with that combination only revealed a grand total of 1 additional one where a decompilation made sense: TH05's version of snd_kaja_interrupt(), which is now compiled from the same C++ file for all 4 games that use it. And well, looks like some quirks really remain unnoticed and undocumented until you look at a function for the 11th time: Its return value is undefined if BGM is inactive – that is, if the user disabled it, or if no FM board is installed. Not that it matters for the original code, which never uses this function to retrieve anything from KAJA's drivers. But people apparently do copy ReC98 code into their own projects, so it is something to keep in mind.

All in all, nothing quite at jank level in this one, but we were surely grazing that tag. Next up, with that out of the way: The bullet update/step function! Very soon in fact, since I've mostly got it done already. 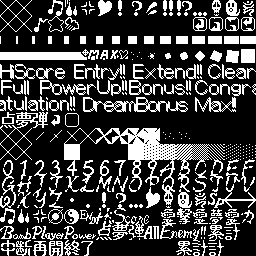 Well, that took twice as long as I thought, with the two pushes containing a lot more maintenance than actual new research. Spending some time improving both field names and types in 32th System's TH03 resident structure finally gives us all of those structures. Which means that we can now cover all the remaining decompilable ZUN.COM parts at once…

Oh wait, their main() functions have stayed largely identical since TH02? Time to clean up and separate that first, then… and combine two recent code generation observations into the solution to a decompilation puzzle from 4½ years ago. Alright, time to decomp-

Oh wait, we'd kinda like to properly RE all the code in TH03-TH05 that deals with loading and saving .CFG files. Almost every outside contributor wanted to grab this supposedly low-hanging fruit a lot earlier, but (of course) always just for a single game, while missing how the format evolved.

So, ZUN.COM. For some reason, people seem to consider it particularly important, even though it contains neither any game logic nor any code specific to PC-98 hardware… All that this decompilable part does is to initialize a game's .CFG file, allocate an empty resident structure using master.lib functions, release it after you quit the game, error-check all that, and print some playful messages~ (OK, TH05's also directly fills the resident structure with all data from MIKO.CFG, which all the other games do in OP.EXE.) At least modders can now freely change and extend all the resident structures, as well as the .CFG files? And translators can translate those messages that you won't see on a decently fast emulator anyway? Have fun, I guess 🤷‍

And you can in fact do this right now – even for TH04 and TH05, whose ZUN.COM currently isn't rebuilt by ReC98. There is actually a rather involved reason for this:

So yeah, no meaningful RE and PI progress at any of these levels. Heck, even as a modder, you can just replace the zun zun_res (TH02), zun -5 (TH03), or zun -s (TH04/TH05) calls in GAME.BAT with a direct call to your modified *RES*.COM. And with the alternative being "manually typing 0 and 1 bits into a text file", editing the sprites in TH05's GJINIT.COM is way more comfortable in a binary sprite editor anyway.

For me though, the best part in all of this was that it finally made sense to throw out the old Borland C++ run-time assembly slices 🗑 This giant waste of time became obvious 5 years ago, but any ASM dump of a .COM file would have needed rather ugly workarounds without those slices. Now that all .COM binaries that were originally written in C are compiled from C, we can all enjoy slightly faster grepping over the entire repository, which now has 229 fewer files. Productivity will skyrocket!