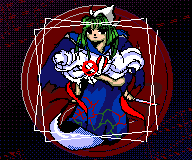 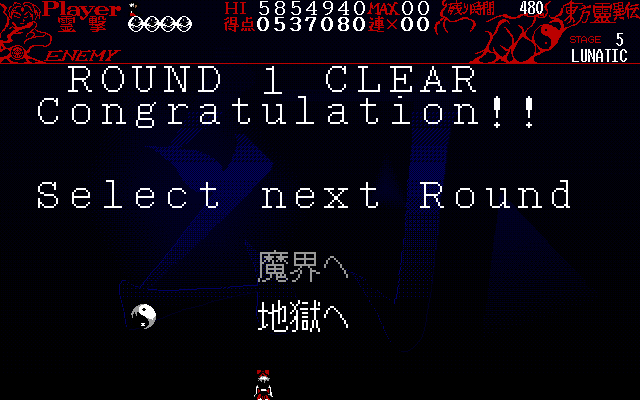 …has no generic (read: single/sane) implementation, and is only implemented as methods of some boss entity class. And then again for Sariel's dress and wand animations, and then again for Reimu's animations, both of which weren't even part of these 4 pushes. Looking forward to decompiling essentially the same algorithms all over again… And that's how TH01 became the largest and most bloated PC-98 Touhou game. So yeah, still not done with image formats, even at 44% RE.

This means I also had to reverse-engineer that "boss entity" class… yeah, what else to call something a boss can have multiple of, that may or may not be part of a larger boss sprite, may or may not be animated, and that may or may not have an orb hitbox?
All bosses except for Kikuri share the same 5 global instances of this class. Since renaming all these variables in ASM land is tedious anyway, I went the extra mile and directly defined separate, meaningful names for the entities of all bosses. These also now document the natural order in which the bosses will ultimately be decompiled. So, unless a backer requests anything else, this order will be:

As everyone kind of expects from TH01 by now, this class reveals yet another… um, unique and quirky piece of code architecture. In addition to the position and hitbox members you'd expect from a class like this, the game also stores the .BOS metadata – width, height, animation frame count, and 📝 bitplane pointer slot number – inside the same class. But if each of those still corresponds to one individual on-screen sprite, how can YuugenMagan have 5 eye sprites, or Kikuri have more than one soul and tear sprite? By duplicating that metadata, of course! And copying it from one entity to another

At this point, I feel like I even have to congratulate the game for not actually loading YuugenMagan's eye sprites 5 times. But then again, 53,760 bytes of waste would have definitely been noticeable in the DOS days. Makes much more sense to waste that amount of space on an unused C++ exception handler, and a bunch of redundant, unoptimized blitting functions

(Thinking about it, YuugenMagan fits this entire system perfectly. And together with its position in the game's code – last to be decompiled means first on the linker command line – we might speculate that YuugenMagan was the first boss to be programmed for TH01?)

So if a boss wants to use sprites with different sizes, there's no way around using another entity. And that's why Girl-Elis and Bat-Elis are two distinct entities internally, and have to manually sync their position. Except that there's also a third one for Attacking-Girl-Elis, because Girl-Elis has 9 frames of animation in total, and the global .BOS bitplane pointers are divided into 4 slots of only 8 images each.

Same for SinGyoku, who is split into a sphere entity, a person entity, and a… white flash entity for all three forms, all at the same resolution. Or Konngara's facial expressions, which also require two entities just for themselves.

And once you decompile all this code, you notice just how much of it the game didn't even use. 13 of the 50 bytes of the boss entity class are outright unused, and 10 bytes are used for a movement clamping and lock system that would have been nice if ZUN also used it outside of Kikuri's soul sprites. Instead, all other bosses ignore this system completely, and just party on the X/Y coordinates of the boss entities directly.

As for the rendering functions, 5 out of 10 are unused. And while those definitely make up less than half of the code, I still must have spent at least 1 of those 4 pushes on effectively unused functionality.
Only one of these functions lends itself to some speculation. For Elis' entrance animation, the class provides functions for wavy blitting and unblitting, which use a separate X coordinate for every line of the sprite. But there's also an unused and sort of broken one for unblitting two overlapping wavy sprites, located at the same Y coordinate. This might indicate that Elis could originally split herself into two sprites, similar to TH04 Stage 6 Yuuka? Or it might just have been some other kind of animation effect, who knows.

After over 3 months of TH01 progress though, it's finally time to look at other games, to cover the rest of the crowdfunding backlog. Next up: Going back to TH05, and getting rid of those last PI false positives. And since I can potentially spend the next 7 weeks on almost full-time ReC98 work, I've also re-opened the store until October!