Alright, onto Konngara! Let's quickly move the escape sequences used later in the battle to C land, and then we can immediately decompile the loading and entrance animation function together with its filenames. Might as well reverse-engineer those escape sequences while I'm at it, though – even if they aren't implemented in DOSBox-X, they're well documented in all those Japanese PDFs, so this should be no big deal…

…wait, ESC )3 switches to "graph mode"? As opposed to the default "kanji mode", which can be re-entered via ESC )0? Let's look up graph mode in the PC-9801 Programmers' Bible then…

> Kanji cannot be handled in this mode.

…and that's apparently all it has to say. Why have it then, on a platform whose main selling point is a kanji ROM, and where Shift-JIS (and, well, 7-bit ASCII) are the only native encodings? No support for graph mode in DOSBox-X either… yeah, let's take a deep dive into NEC's IO.SYS, and get to the bottom of this.

And yes, graph mode pretty much just disables Shift-JIS decoding for characters written via INT 29h, the lowest-level way of "just printing a char" on DOS, which every printf() will ultimately end up calling. Turns out there is a use for it though, which we can spot by looking at the 8×16 half-width section of font ROM:

The half-width glyphs marked in red correspond to the byte ranges from 0x80-0x9F and 0xE0-0xFF… which Shift-JIS defines as lead bytes for two-byte, full-width characters. But if we turn off Shift-JIS decoding… 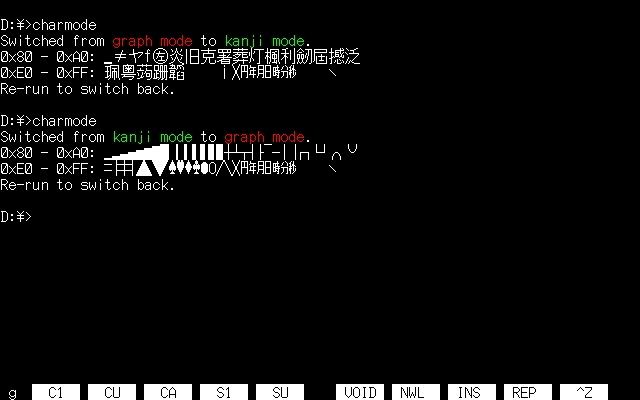 (Yes, that g in the function row is how NEC DOS indicates that graph mode is active. Try it yourself by pressing Ctrl+F4!)

Jackpot, we get those half-width characters when printing their corresponding bytes.
I've re-implemented all my findings into DOSBox-X, which will include graph mode in the upcoming 0.83.14 release. If P0140 looks a bit empty as a result, that's why – most of the immediate feature work went into DOSBox-X, not into ReC98. That's the beauty of "anything" pushes.

So, after switching to graph mode, TH01 does… one of the slowest possible memset()s over all of text RAM – one printf(" ") call for every single one of its 80×25 half-width cells – before switching back to kanji mode. What a waste of RE time…? Oh well, at least we've now got plenty of proof that these weird escape sequences actually do nothing of interest.

As for the Konngara code itself… well, it's script-like code, what can you say. Maybe minimally sloppy in some places, but ultimately harmless.
One small thing that might not be widely known though: The large, blue-green Siddhaṃ seed syllables are supposed to show up immediately, with no delay between them? Good to know. Clocking your emulator too low tends to roll them down from the top of the screen, and will certainly add a noticeable delay between the four individual images.

… Wait, but this means that ZUN could have intended this "effect". Why else would he not only put those syllables into four individual images (and therefore add at least the latency of disk I/O between them), but also show them on the foreground VRAM page, rather than on the "back buffer"?

Meanwhile, in 📝 another instance of "maybe having gone too far in a few places": Expressing distances on the playfield as fractions of its width and height, just to avoid absolute numbers? Raw numbers are bad because they're in screen space in this game. But we've already been throwing PLAYFIELD_ constants into the mix as a way of explicitly communicating screen space, and keeping raw number literals for the actual playfield coordinates is looking increasingly sloppy… I don't know, fractions really seemed like the most sensible thing to do with what we're given here. 😐

So, 2 pushes in, and we've got the loading code, the entrance animation, facial expression rendering, and the first one out of Konngara's 12 danmaku patterns. Might not sound like much, but since that first pattern involves those blue-green diamond sprites and therefore is one of the more complicated ones, it all amounts to roughly 21.6% of Konngara's code. That's 7 more pushes to get Konngara done, then? Next up though: Two pushes of website improvements.