So, let's finally look at some TH01 gameplay structures! The obvious choices here are player shots and pellets, which are conveniently located in the last code segment. Covering these would therefore also help in transferring some first bits of data in REIIDEN.EXE from ASM land to C land. (Splitting the data segment would still be quite annoying.) Player shots are immediately at the beginning…

…but wait, these are drawn as transparent sprites loaded from .PTN files. Guess we first have to spend a push on 📝 Part 2 of this format.
Hm, 4 functions for alpha-masked blitting and unblitting of both 16×16 and 32×32 .PTN sprites that align the X coordinate to a multiple of 8 (remember, the PC-98 uses a planar VRAM memory layout, where 8 pixels correspond to a byte), but only one function that supports unaligned blitting to any X coordinate, and only for 16×16 sprites? Which is only called twice? And doesn't come with a corresponding unblitting function?

Yeah, "unblitting". TH01 isn't double-buffered, and uses the PC-98's second VRAM page exclusively to store a stage's background and static sprites. Since the PC-98 has no hardware sprites, all you can do is write pixels into VRAM, and any animated sprite needs to be manually removed from VRAM at the beginning of each frame. Not using double-buffering theoretically allows TH01 to simply copy back all 128 KB of VRAM once per frame to do this.

But that would be pretty wasteful, so TH01 just looks at all animated sprites, and selectively copies only their occupied pixels from the second to the first VRAM page.

Alright, player shot class methods… oh, wait, the collision functions directly act on the Yin-Yang Orb, so we first have to spend a push on that one. And that's where the impression we got from the .PTN functions is confirmed: The orb is, in fact, only ever displayed at byte-aligned X coordinates, divisible by 8. It's only thanks to the constant spinning that its movement appears at least somewhat smooth.
This is purely a rendering issue; internally, its position is tracked at pixel precision. Sadly, smooth orb rendering at any unaligned X coordinate wouldn't be that trivial of a mod, because well, the necessary functions for unaligned blitting and unblitting of 32×32 sprites don't exist in TH01's code. Then again, there's so much potential for optimization in this code, so it might be very possible to squeeze those additional two functions into the same C++ translation unit, even without position independence…

More importantly though, this was the right time to decompile the core functions controlling the orb physics – probably the highlight in these three pushes for most people.
Well, "physics". The X velocity is restricted to the 5 discrete states of -8, -4, 0, 4, and 8, and gravity is applied by simply adding 1 to the Y velocity every 5 frames

No wonder that this can easily lead to situations in which the orb infinitely bounces from the ground.
At least fangame authors now have a reference of how ZUN did it originally, because really, this bad approximation of physics had to have been written that way on purpose. But hey, it uses 64-bit floating-point variables!

…sometimes at least, and quite randomly. This was also where I had to learn about Turbo C++'s floating-point code generation, and how rigorously it defines the order of instructions when mixing double and float variables in arithmetic or conditional expressions. This meant that I could only get ZUN's original instruction order by using literal constants instead of variables, which is impossible right now without somehow splitting the data segment. In the end, I had to resort to spelling out ⅔ of one function, and one conditional branch of another, in inline ASM. 😕 If ZUN had just written 16.0 instead of 16.0f there, I would have saved quite some hours of my life trying to decompile this correctly…

To sort of make up for the slowdown in progress, here's the TH01 orb physics debug mod I made to properly understand them. To use it, simply replace REIIDEN.EXE, and run the game in debug mode, via game d on the DOS prompt.
Its code might also serve as an example of how to achieve this sort of thing without position independence. 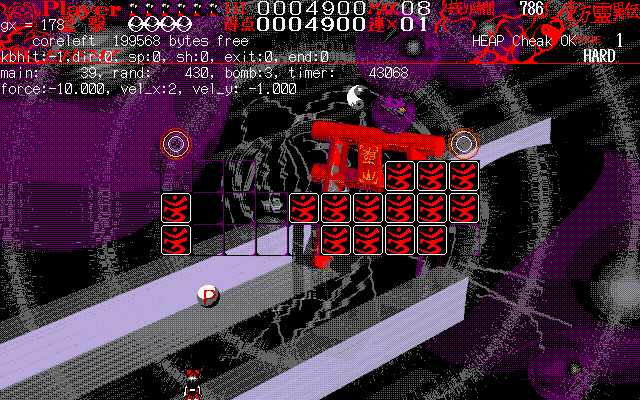 Alright, now it's time for player shots though. Yeah, sure, they don't move horizontally, so it's not too bad that those are also always rendered at byte-aligned positions. But, uh… why does this code only use the 16×16 alpha-masked unblitting function for decaying shots, and just sloppily unblits an entire 16×16 square everywhere else?

The worst part though: Unblitting, moving, and rendering player shots is done in a single function, in that order. And that's exactly where TH01's sprite flickering comes from. Since different types of sprites are free to overlap each other, you'd have to first unblit all types, then move all types, and then render all types, as done in later PC-98 Touhou games. If you do these three steps per-type instead, you will unblit sprites of other types that have been rendered before… and therefore end up with flicker.
Oh, and finally, ZUN also added an additional sloppy 16×16 square unblit call if a shot collides with a pellet or a boss, for some guaranteed flicker. Sigh.

And that's ⅓ of all ZUN code in TH01 decompiled! Next up: Pellets!